THE MUSEUM OF MODERN ART: exhibitions and events for september 2015 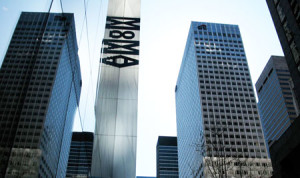 Transmissions: Art in Eastern Europe and Latin America, 1960–1980 focuses on the parallels and connections among an international scene of artists working in—and in reference to—Latin America and Eastern Europe during the 1960s and 1970s. The radical experimentation, expansion, and dissemination of ideas that marked the cultural production of these decades (which flanked the widespread student protests of 1968) challenge established art-historical narratives in the West. Artists from Prague to Mexico City developed alternative and ever-expanding networks of distribution and organization, via Paris, Vienna, and Venice, to circumvent the borders established after World War II, local forms of state and military repression, and Western accounts of artistic mastery and individualism. One major transformation across Latin American and Eastern European art scenes was the embrace of institutional critique and an emphasis on the creation of art outside a market context.

Perspectives on From Bauhaus to Buenos Aires: Grete Stern and Horacio Coppola
Thursday, September 10, 6:00 p.m.
The Celeste Bartos Theater, mezzanine, The Lewis B. and Dorothy Cullman Education and Research Building

Picasso Sculpture is a sweeping survey of Pablo Picasso’s profoundly innovative and influential work in three dimensions. The largest museum exhibition of Picasso’s sculptures to take place in the United States in nearly half a century, the exhibition brings together around 150 sculptures from Picasso’s entire career via loans from major public and private collections in the U.S. and abroad, with the largest selection of works coming from the Musée national Picasso-Paris. With many works on view for the first time in the U.S., the exhibition provides an opportunity to explore a rarely seen aspect of Picasso’s large and prolific career. MoMA is the sole venue.

Afterlives: The Persistence of Performance
September 25–26
The Roy and Niuta Theater Titus 2

In conjunction with the French Institute Alliance Française’s Crossing the Line festival, and in collaboration with Columbia University School of the Arts as part of Curating the Ephemeral, MoMA’s Department of Media and Performance Art hosts three talks for Afterlives: The Persistence of Performance. Convened by Adrian Heathfield and André Lepecki, Afterlives addresses the ways in which so-called ephemeral art persists over time. Performance is increasingly documented, archived, institutionally incorporated, and globally disseminated. While its ephemeral nature is often celebrated, its inherent transience binds it to its many returns—its mediations and afterlives. Today, criticism is focused more on the recurrence and persistence of performance than on its disappearance. Performance’s material remains linger as vague memories, oral legend, transmitted techniques, or infrastructures of feeling.

What Lies Beneath: The Films of Robert Zemeckis
September 29–October 18
The Roy and Niuta Titus Theaters

Robert Zemeckis, creator of some of the most iconic films of the last 40 years, including Romancing the Stone (1984), Back to the Future (1985), Forrest Gump (1994), and Cast Away (2000), will be honored with a major career retrospective at The Museum of Modern Art from September 29 through October 18, 2015. Opening on September 29 with a special screening of Zemeckis’ latest film, The Walk (2015), the retrospective will include all of Zemeckis’ feature films as well as a selection of his television work and student films. Zemeckis will participate in a post-screening Q&A on September 29 following the screening of The Walk, the PG-rated, all-audience 3D motion picture experience that retells Philippe Petit’s high wire walk between the World Trade Center towers. On October 3, MoMA will celebrate the 30th anniversary of the release of Back to the Future by screening all three Back to the Future films in succession, just in advance of October 21, 2015, the date that Marty McFly travels to the future in Back to the Future II (1989).