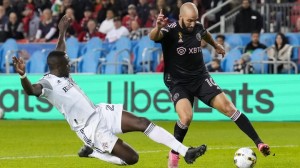 Gonzalo Higuain scored yet another late goal in the 86th minute to lift visiting Inter Miami FC to a critical 1-0 victory over Toronto FC on Friday night. Robert Taylor and Jean Mota helped set up Higuain’s team-leading 14th goal of the season. It was his 12th goal in his last 14 games and third straight game scoring after the 80th minute of the match. Miami (13-13-6, 45 points) remained seventh in the Eastern Conference battle for seven playoff places, but pulled even on points with sixth-place Orlando and moved three ahead of eighth-place Columbus. The Herons trail Orlando on the second tiebreaker of goal differential and entered the weekend in front of Columbus on the first tiebreaker of total wins. They’ve now won three in a row and will play their last two at home against Orlando on Wednesday and Montreal on Oct. 9.Quentin Westberg made four saves for Toronto (9-17-7, 34 points), which dropped its fourth straight game. Toronto had already been eliminated from postseason contention but was trying to keep its fourth clean sheet of the campaign.
Lorenzo Insigne had arguably the best chance for the hosts moments before halftime, but fired high.
Miami was the clear aggressor over 90 minutes and particularly in the second half. The Herons were eventually rewarded for their effort four minutes from full time.
Taylor attacked from the right to start the sequence and connected with former Toronto playmaker Alejandro Pozuelo, who then spotted Mota to his left.
Mota returned the ball to Taylor, who had continued his run into the penalty area, and then Taylor crossed left for Higuain a bit beyond the penalty spot.
Higuain made a crafty fake right to avoid a defender, then took the ball to his left and fired a low finish between Westberg and the right post.
The goal had been coming. Mota struck the outside of the post with an excellently hit free kick from just outside the penalty area in the 50th minute. Then in the 73rd, Pozuelo played Ariel Lassiter in on the break, only to be denied by Westberg from close range.